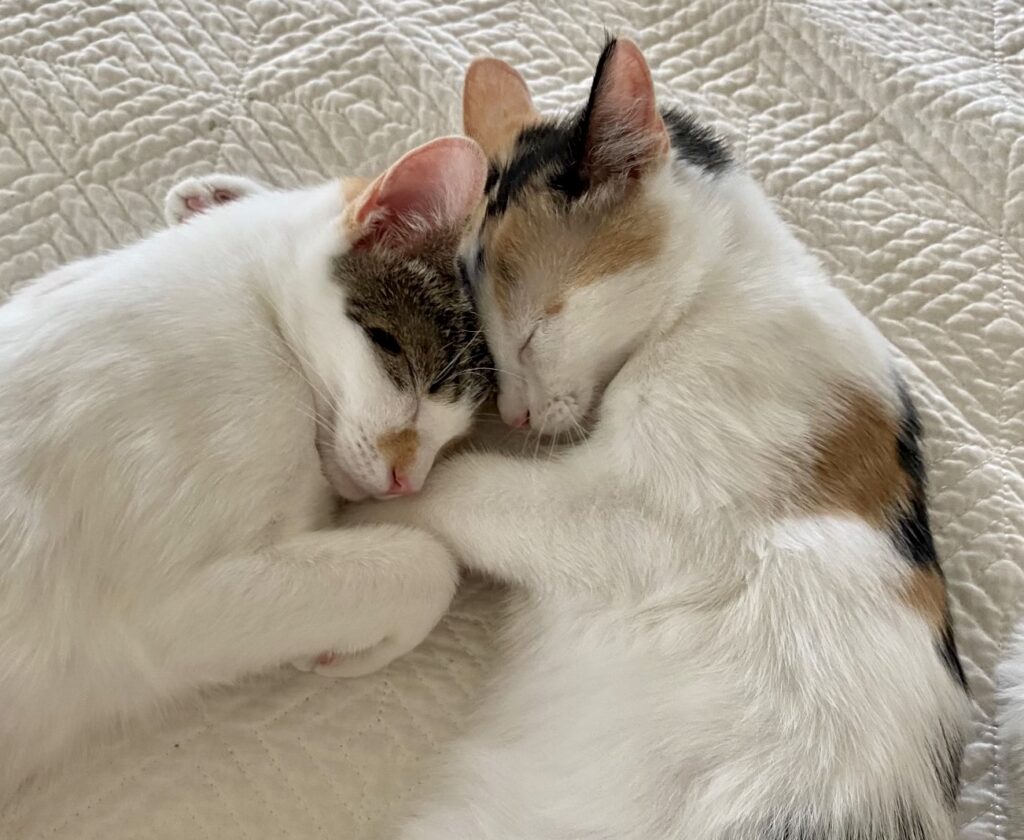 The Beauty of Bonded Cats

The concept of bonded cats means that the two cats have a special relationship and should remain together, for their physical and emotional well-being. The bond formed between the two cats is significant. Take Gigi and Gamble, for example, sisters who have a clear bond. They have become dependent upon each other, and to ensure their happiness and lifelong well-being, getting adopted together would be ideal. 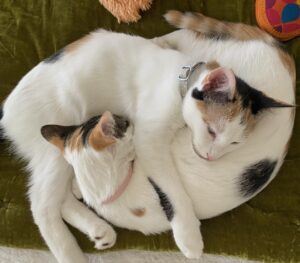 Why should bonded cats remain together? It is important to keep bonded cats together for their development of many different skills. For example, they learn from each other; how to use the litter box, how to interact with humans, and how to socialize and play together. If two bonded cats were to be separated from each other,  they would likely end up suffering from depression, leading to other behavior issues. A study has shown that cats who are bonded together are more socially adjusted and live longer, happier lives.

How can you tell if two cats are bonded? If you are unsure of whether cats are bonded, there are some things to look for. These include enjoying playtime together, and also sleeping next to each other. Other bonded behaviors include rubbing their bodies and faces against each other, and eating food at the same time. It is also important to note that even if two cats are bonded, they may still fight. Fighting is normal because it is just like playing and cats are generally very territorial animals. Male cats also do tend to be more aggressive, so playing could look more like fighting, but this does not mean anything is wrong with their bond.

Do only siblings bond? Cats who have been together since birth often bond during the early stages of  their lives. However, if these cats are not littermates, depending on how they were introduced and the personality of the cats, it could take a few days to a few months to become bonded. The most important thing to make sure of when introducing cats in which you hope to become bonded is easing them into the relationship, and making sure they are calm. The first impression is very significant. The way that the living space of the cats is set up is also crucial because there should be enough places to hide and rest, and the food, litter, and water should be positioned so that the cats do not feel trapped.

Why Adopt a Bonded Pair of Cats? One main reason why because you might consider adopting bonded cats is these cats will be happier. Although having two cats in your home instead of just one is a little bit more work, if they are happier it means so much and is worth it. Also, the cats will be on a very similar sleeping, eating, and playing schedule, which is convenient and time saving. Bonded cats give each other comfort, in addition to a playmate. When you aren’t around, there is less worry about your cat feeling sad and lonely when it has a best friend at home. If you are thinking about adopting a cat, just take into consideration adopting a bonded pair, especially if you have any thoughts about possibly getting another cat in the future. As Juli Cialone, Founder of Rock n Rescue, promises bonded pairs not only love each other, but bond with humans as well. “Bonded pairs don’t love you any less, in fact you get twice the love!”