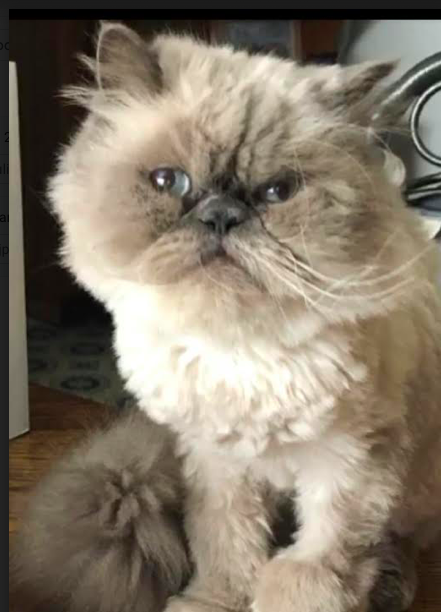 Have you ever wondered about why certain cat breeds look so much alike?  Well, some breeds are actually blends of 2 – hence, the similarity.  Recently, Rock n’ Rescue rescued a Himalayan cat named Scrunchie from the Animal Care Center in NYC.  After several months of medical treatment, we began to see her personality and beauty come through.  We had thought Scrunchie was a Persian -flat face and fluffy fur – but the we realized she had blue eyes and a Lilac Pt coat.  Was this a Persian?!!

In fact, Scrunchie IS a Persian – well half of one!!  Why?!  Himalayan cats are a cross between Persians and Siamese cats. Many of these cats look almost identical to Persians, the main difference being  that Himalayan’s have the blue eyes and “point” colors of a Siamese AND the flat face and long curly coat of a Persian. You might have heard classic “point colors” are called Seal (Brown/Cream), Blue(Grey), Lilac (Light Grey Blue), Chocolate (Brown/White), Lynx (M shape Grey), Red (Flame), and Cream. Unique points can also be striped like a tabby or multi-color like a tortoiseshell.  These point colors are what show that the Persian is in fact mixed with a Siamese = Himalayan Cat!

Personalities of Himalayans (also known as “Himys”) are often considered calm and affectionate, yet they are a bit independent so they typically prefer a quieter home. Size-wise Himys are often small to medium. They will ask for attention frequently, but are not classically “lap cats,” although some people claim that Himalayan cats enjoy the company of children more than other types of cats do. Because of their dense and often semi curly fur, they also require more grooming than the short haired breeds, and their flat face can require daily cleaning around the eyes and nose. 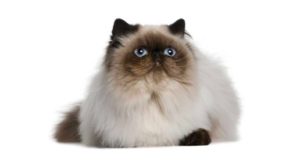 Fun fact!  The Guinness world record cat with the longest hair was a Himalayan named Colonel Meow – who is famous for his social media posts too. Unlike the purebred wedge headed Siamese varieties, the Himy is known to shed more, especially in warm climates. It is also important to note, that like their Persian 1/2s, Himy’s can have difficult breathing due if they inherit the more flat faced features.  Some people recommend leaving the house at a colder temperature during the summer, or to let the cat sleep next to an air conditioner – helping both the shedding and the breathing issues. They also need to be encouraged to exercise, so it is recommended that you look after its health and its diet to protect from obesity and other issues.   Ultimately, Himalayan’s are truly the best of both breeds – spectacular beauties who bring much love to all who own them! 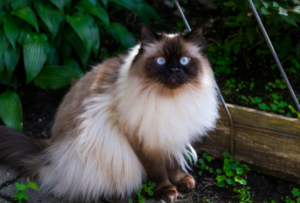